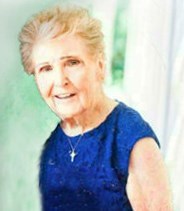 Carol McKinley was born on December 25, 1929 in Pasadena, CA, daughter of the late Robert Siders and late Alma Marie Cameron Eden. Carol married Gene Edwin McKinley on June 13,1948. In 1955 Carol and Gene bought their first home on Mills Ave.in Whittier, CA where they raised their family. Carol lived in this home until 2011 when she was no longer able to care for herself. She then lived with her daughters, who took care of her, switching from one to the other every few months, but ultimately stayed in NC for the past 3 years due to her health. She was employed for years as an office manager in the wholesale appliance industry. Carol was also an Amway Distributor for many years, enjoying being in business with her late husband.

Throughout her years, Carol was involved in several social organizations and she enjoyed volunteering whenever she could. She loved to travel and traveled to many places in her RV. She was an avid Elvis Presley fan and listened to his music often. As most of Carol’s family and friends know, she loved and enjoyed teddy bears, having a collection of several hundred bears. Carol will be remembered as a loving wife, mother, grandmother, great-grandmother and friend.

Mrs. McKinley is preceded in death by her husband of 50 years, Dr. Gene McKinley, and her sister, Betty Bird. She will be cherished as a loving and devoted wife, mother, grandmother, great-grandmother and friend.

Carol will always be in our hearts.

Flowers and decorations are removed every Tuesday.